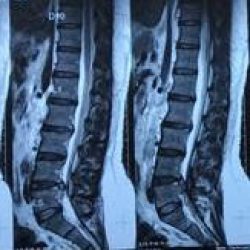 We present a successful case example of slip disc treatment. 40 years old Mr. PD came to us with severe left leg pain. He was suffering for last 6 months. According to the patient, the pain was gradually worsening. He was unable to attend his office due to pain and was on bed rest for last 3 months. For last 15 days, patient started having weakness in left foot with difficulty in walking due to weakness in leg and pain. Patients MRI showed left sided severe L4-5 slip disc.

Patient was already undergoing medical slip disc treatment. Patient had consulted many non-allopathic doctors specializing in non-surgical treatment of slip disc. He had twice received 6 weeks of bed rest. He had also undergone acupuncture and physiotherapy for an extended period of time. For any kind of spine problem, a non-surgical treatment including medicines and physiotherapy is always tried first, especially for those who do not have signs of severe nerve damage (severe pain/ loss of sensation/ weakness in legs/ loss of urine control). Fortunately, more than 80% patients get better after first episode of slip disc. However, this recovery rate drops to less than 50% after second episode. Acupuncture, and other reflex stimulations release certain chemicals in the brain which makes patient feel their pain and numbness to a lesser extent.

Physiotherapy is primarily used to strengthen back muscles in cases of slip disc to support spinal column better and to prevent further progression of the slip disc. Epidural steroid injection is another pain management modality which can be tried to provide acute pain relief; however, it does not reverse primary pathology. These injections usually last 4-6 months and pain returns if slip disc is still persistent.

Patient had already met some of the best orthopaedic and neuro-spine surgeons in Mumbai. Unfortunately, he received different kind of opinions from them including bed rest with continued activity restriction, epidural injection, slip disc surgery to spine fusion surgery. One of the biggest dilemma while deciding about best slip disc treatment is whether only protruded part of the disc should be removed or entire disc should be removed with spinal fusion procedure. There are several factors which will decide whether spinal fusion is recommended for a particular patient or not. In general, patients with associated severe back pain, severe slip disc, spinal instability, spondylolysis/ spondylolisthesis, spine deformity require spine instrumentation.

By the time patient came to us, he had left sided foot drop and was walking with the help of crutches. Patient now had to apply pressure while passing urine, though there was no loss of control on urine. Fortunately, he did not have significant back pain. In view of severity and duration of the symptoms, it was decided that patient will require surgical decompression of slip disc. A micro-endoscopic discectomy was performed. Patient had immediate significant improvement in his leg pain.

It is always a possibility that after a discectomy procedure, a recurrent disc prolapse can occur at the same level. This happens in 2-3% of cases. Also, a continued disc degeneration can lead to future symptoms of back pain. Unfortunately, both these problems cannot be predicted and hence, are dealt with if and when they occur by a revision decompression or spinal fusion surgery. Some amount of activity restriction and life-style modification (avoiding sitting on floor, lifting heavy weight, bending, strenuous work/ exercises; weight reduction; posture correction), especially in the early post-operative period, help avoid recurrent disc prolapse.

It is usual scenario that leg pain (radiculopathy) gets significantly better immediately after the surgery. However, pre-existing numbness, loss of sensation and weakness take few weeks before returning to normal (usually in that order) depending upon duration and severity of symptoms before the surgery. Literature says that longer the duration and severity of the symptoms, more the permanent nerve damage and psychological changes to the patient. These usually leads to slow, incomplete or unsatisfactory recovery.

Patient got discharged from hospital next day after the surgery. He was started on electrical nerve stimulation of left leg muscles and physiotherapy to help regain strength. In the beginning, he was given a foot drop splint to help him get balance while walking and to make his walking less energy consuming. Patient, being in a desk job, was able to join his office three days after the surgery. Three months after the surgery, he had almost complete recovery of foot drop and he could walk independently.

Patients are always trying to find an alternative solution to surgery. Fortunately, majority of spinal problems get better with medical treatment. However, if symptoms are not getting better in 6-12 weeks, this is a red flag. This indicates that the pathology is not going to respond to medical line of treatment. This is the correct time to decide about surgery. A further delay will not only lead to unnecessary suffering, loss of productive life and work, but also will compromise the result of surgery. A correctly chosen surgical procedure and proper execution is bound to give best slip disc treatment for the patients who do not respond to medical treatment.