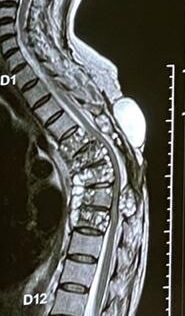 A 40 years old female patient presented to us with 3 months history of progressively increasing weakness in both legs. Patient is not able to walk independently. Two relatives were supporting her to walk. Patient also gave us history of a spine surgery done in. upper back (thoracic spine) 2 years ago. Details of that surgery were not available, however, it seemed a spinal decompression procedure was done. According to the patient, that time also patient had similar sort of symptoms, and after surgery she recovered and started walking independently. Patient is from a small village in Haryana. She is a farmer and was also involved in cattle grazing including sheep.

Patient had a cystic (balloon like) swelling of about 5 centimeter diameter at the site of previous surgery. In view of severe weakness in legs and inability to walk, an MRI was done to identify any pressure on spinal cord. MRI showed a very peculiar problem. There were multiple cysts affecting 5 thoracic vertebrae. Cysts were also spreading in the chest cavity near lungs and in ribs on both side. There was severe pressure on spinal cord. MRI report indicated a very rare infection, Echinococcosis (Hydatid Cyst)

Hydatid cyst is secondary to infection caused by a particular worm, Tapeworm (Echinococcus). There are multiple subspecies of Tapeworm. These worms primarily affect dogs and sheep to complete their life-cycle. However, occasionally humans are affected. Tapeworm produce cystic masses in the body. Depending upon the organ affected, these cysts produce various symptoms. In our case, as the cysts were primarily in vertebral bodies, they compressed spinal cord leading to symptoms of spinal cord compression.

To confirm the diagnosis we initially performed the biopsy of the lesion under local anaesthesia. The cystic swelling under the previous scar was removed and some sample was also collected from the vertebral bodies. Biopsy report confirmed MRI diagnosis of Hydatid Cyst.

As patient had severe spinal cord compression causing loss of power in legs, it was decided that patient need to undergo spinal decompression surgery on urgent basis. Also, to support weak disease affected vertebrae, spinal instrumentation was also planned. One of the biggest problem with surgery on Hydatid Cyst is possibility of developing life threatening allergic reaction to released cyst material during the surgery. Infectious disease specialist was consulted before surgery and patient was started on high dose anti-helminthic (to kill worm) medications.

Patient then underwent revision thoracic spine decompression surgery. There were many cysts compressing spinal cord. Ideally, cyst should not rupture during surgery and be removed as a whole to prevent spillage of cyst fluid. This is necessary to minimize allergic reactions and formation of new cysts caused by released worms from the cyst. However, in this particular case it was not possible due to multi-cystic nature of the pathology. Spinal cord was first compressed from behind and then from the front side by anterior to it from its sides. Pedicle screw fixation was done on 3 levels above and 3 levels below the affected 5 vertebrae. Fortunately there was no allergic (anaphylaxis) reaction during the surgery. Patient did not have any worsening of her leg strength after surgery. The day after the surgery, patient started gaining her leg power. 3 days after the surgery we were able to make patient stand and walk with the help of a walker. At the time of discharge on post-operative day 6, patient was walking independently with minimum support. She is continuing high doses of anti-helminthic medications to prevent recurrence.

One of the biggest risk after surgery on Hydatid Cyst is possibility of recurrence. This disease is similar to cancer if recurrence is to be considered. Even after utmost care and complete removal of the cyst, there might be spillage of some amount of cyst material in the wound which can cause formation of multiple new cysts. In our case recurrence is almost certain as it was not possible to remove all the cysts due to multiple vertebral involvement. Patient is kept on high dose anti-helminthic medications and we also plan to start her on radiotherapy to prevent recurrence.